An Indian walks into an Indian Supermarket

Sounds like the set-up for a grand joke, but this is just me exploring what I found to be the least gentrified Indian space in Berlin.

Stuck in what was a balancing act to keep all my glass bottles and plastic bottles from overflowing out of my large tattered grocery bag, I thought about how I had stopped going to the store that I had initially bought the bag from. I wondered if I should replace it with another bag (freshly taken from my bag full of bags). When I was waiting in line for my turn to chuck the bottles into the deposit machine, I wondered about the time that had passed me by.

Used things have an odd effect: they remind you of their age and then you remember your own.

Maybe the milk that you replace on a weekly basis is a reminder of something deeper. Maybe by the third carton of the month, you’re already hyperaware of each day that you’re losing, wondering if you may be lactose intolerant. Before you even finish spelling h-y-p-o-c-h-o-n-d-r-i-a-c, you’re back at the store buying oatmilk, just in case. (Oatmilk is delicious. Don’t @ me.)

The whirring of the deposit machine always brings me back and reminds me:

You’re here now. Recycle your bottles and move along. There are other people waiting in line.

It’s an unsettling feeling, realising that I’ve been away from Chennai for one year, one month, and thirteen days. A personal record for me, and I’m only slightly proud of the adult that it has made me. For the most part, it’s been a year of toil and crossing out days before I can go back, but then came the pandemic challenging our notions of normalcy and dependencies.

There was a time when I would look for home in the most unlikely places. Indian restaurants are somewhere on that list. While they mostly play outdated Bollywood medleys, a few overzealous hymns find their way on to the playlist. Amidst this backdrop, you’re served food that lacks 30% of the flavour and that Indian-ness, that you’re willing to pay good money for.

I can make this at home—the ultimate Indian adult conundrum of wanting to eat outside but fighting the inertia of only being willing to pay for an experience that in no way can be re-engineered.

If I had a plastic bottle for every time that I’ve felt that, I’d have to make daily trips to the deposit machines because I wouldn’t have any storage left under my kitchen sink (that’s 25 cents per bottle that I’d be getting back). Greeted by a placeholder sculpture at the entrance, you will soon find that the supposed melange of cultures fails to mirror any culture at all. The walls are saffron. Who approved this? The novelty falls flat like a couple of marshmallows held together by vermicelli. But, roasting these stereotypical Indian spaces was not the intention. These eateries still work quite well for the unbiased and the European.

If you trace the operations of these restaurants, you will find a pot of gold: the place where they get their ingredients. The first time I entered an Indian store in Berlin, I was awestruck. At that point, I had been in Berlin for 24 days. The store was called India Store, no prizes for guessing. I remember buying five things of which three were snacks and two were spices. I paid two euros each and that made no sense to me. But, that’s the moral, kids. You have to be okay with paying anything because the prices aren’t always on the shelves.

Yes, it sounds shady, but I still see the virtue in selling miniature samosas to a homesick woman-child.

Now, the Indian supermarkets are by no means colourful. They don’t showcase mounds of turmeric, red chilli powder, and cumin powder in sacks. But they do boast of large sacks of rice and flour, sealed ones that you can slap on your way in. The predominantly green vegetables have travelled more than you have, as they sit with the dairy in the refrigerated section. Bundles of coriander and curry leaves that are sick of freelancing in India usually move abroad for a more stable income. The most vibrant section would be the one with all the snacks and their shiny plastic pouches that have call-to-action written all over the packaging. Ever had the Indian extruded potato snack or spicy potato noodles? Think again. 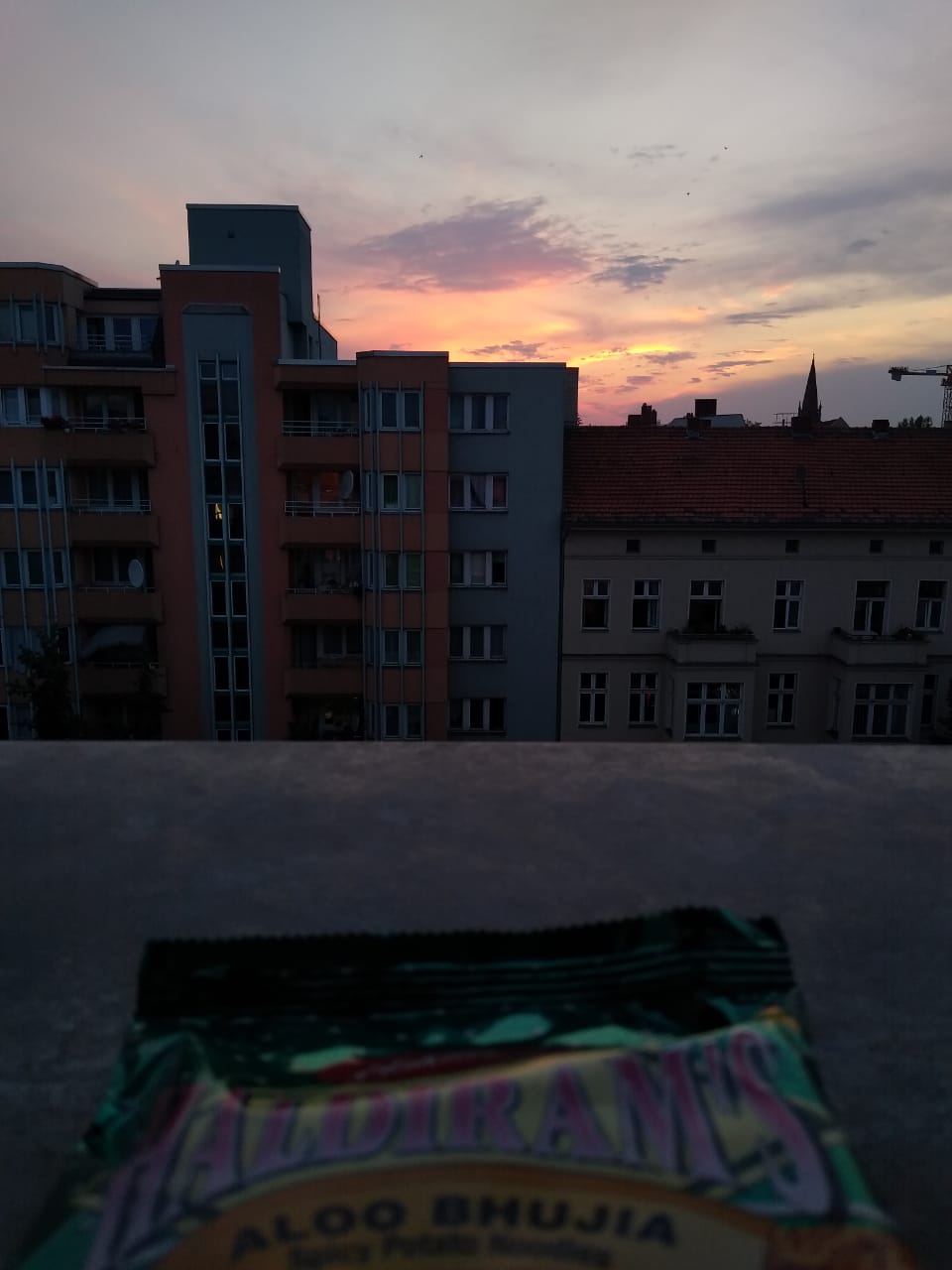 But, back to the space. The bare concrete walls and the mosaic tiles walk with you as the smell of threshed grains lets you dip into a reality that is far from one that celebrates the lengths of graffiti and vintage shops that you passed by before stepping in.  I’ve seen the trucks that deliver to my regular store. The export packs and brands feel less than familiar, but still welcoming. The large trays of pickles and pastes, the spices, the cartons of snacks, and uh… I don’t know; they have everything. I can’t say much about the inventory. It’s a warehouse, but also a ware-home. (Yes, I’m cheesy like that.)  An Indian supermarket is Indian in the truest sense.  So, when I’m running out of mustard seeds or coriander powder, I feel a pinch in my heart. It’s bittersweet because I do want to step into this fun Indian simulation, but then it hits me—I am 7,294 kilometres from home, trying to make upma for dinner (without curry leaves).